Her brother, Albert, committed suicide in 2006. Baraquio experienced a period of anger towards her brother for doing it. She also felt angry that her family didn’t tell her immediately of the initial suicide attempt for fear that the news will stress her as she was a few days away from giving birth to her second child. As Catholics, the family was taught that the person who committed suicide will go to hell and the idea of it brought so much anxiety, fear, and confusion to the Baraquios. To help them, the family went into group counseling and talked to a priest. When they met the priest, he told them that God gives pardon to people who committed suicide and had mental conditions such as his brother who was bipolar. It was the first time they heard of the idea and brought hope to the family.

Baraquio is married to Tinifuloa Grey since 2002 whom she met when she was only 15. Grey is a musician who got his love for music from his father, acclaimed Polynesian singer Jerome Grey. Growing up, the younger Grey never thought he would like music since his father even discouraged his children to pursue it. Taking up architecture in college, his decision changed when his father suffered a massive stroke in 2006 while onstage and Grey found his perspective changed and decided to pursue music as a career. Grey has regular gigs throughout Los Angeles and San Diego and a permanent performer at Disneyland Hotel. Grey was also featured on NBC’s The Voice Season 7 and proud to represent the Samoan community. In 2015, he started a Kickstarter campaign to produce a music video dedicated to his father and for every “Islander”. The goal was $8,500 and he managed to raise over $10,000 money.

Together, Grey and Baraquio have five children, four boys and a girl, and the family is currently based in California.

The Doors That Opened after Winning Miss America 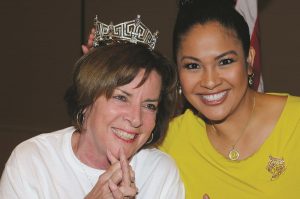 Who is Angela Perez Baraquio?